"Hello, what have we here?"
— Intro Dialogue

Lando's unique trait is called "Fortune Trigger", which increases his chance of a critical hit as his trait goes up by killing enemy heroes and regular troops.

Lando is equipped with the X-8 Night Sniper blaster pistol, which has a thermal vision feature that is activated by aiming down the sights.

Lando as he appears in the 2016 EA Play trailer.

Lando and Dengar in a promotional still for the Bespin Expansion Pack.

Lando with his X-8 Night Sniper on Goazon Badlands. 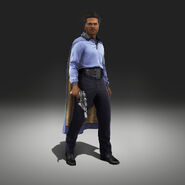 "Lando Calrissian uses cunning and gadgets to confuse and then ambush his opponents with his heat vision enabled X-8 Night Sniper pistol. You won't see Lando if he sees you first."
— In-game description

Lando Calrissian returns in DICE's Star Wars Battlefront II, once again as a Hero for the Rebel Alliance.

Lando is a deceptive and slick hero. His abilities can be used to disable and stun targets, allowing for easier takedowns. He can also disappear from dangerous situations with the use of smoke, where he can wait for his next opportunity to strike.

Lando is at his best when he has his gadgets at the ready. He can trap enemies in a small area with his Disabler, leaving them extremely vulnerable to attack. He can also wipe out an entire enemy squad with his Sharp Shot, which locks on to multiple targets and can one-hit all the default trooper classes, or deal high damage to enemy reinforcements and heroes. His Smoke Grenade can also be used to hide Lando from enemy vision, although Lando can still see enemy targets with the use of his X-8 Night Sniper.

"Lando can use his X-8 Night Sniper's thermal scope to see and engage his enemies through smoke."
— First hint
"Lando’s Disabler will scramble the radar of enemies nearby and mark their position for Lando and his allies."
— Second hint. This hint mistakenly claims that Lando's allies can also spot marked enemies, but they are marked only for Lando.
"Lando is best played cautiously, distracting and ambushing his enemies before ducking into the shadows"
— Third hint

"How you doing you old pirate?! So good to see you!"
— First emote

"Sorry. Am I interrupting anything?"
— Second emote

"Yeah, I'm responsible these days. It's the price you pay for being successful."
— Third emote

"You got a lotta guts coming here after what you pulled!"
— Fourth emote

"Never thought I'd be down in the trenches."
— Upon spawning

"Everything you've heard about me... is true."
— Upon spawning, when the Professional "Sportsman" or Raconteur skins are equipped.

"I love these things!"
— Upon using Smoke Grenade

"See you around!"
— Upon using Smoke Grenade

"...And then, Lando Calrissian disappeared in a puff of smoke, leaving only a legend behind!"
— Upon using Smoke Grenade, when the Professional "Sportsman" or Raconteur skins are equipped.

"Problem with your scanners?"
— Upon using Disruptor

"Guess what this does!"
— Upon using Disruptor

"Won this thing in a card game on Neimoidian Prime!"
— Upon using Disruptor, when the Professional "Sportsman" or Raconteur skins are equipped.

"I'm really not a fighter."
— Upon using Sharp Shot

"And here I liked you!"
— Upon using Sharp Shot

"Would it be more fair if I used my bad hand?"
— Upon using Sharp Shot

"Being handsome is a full-time job!"
— At random points in a match

"That's not Vader! Who is that?"
— Upon spotting Kylo Ren

"Zabrak with a lightsaber, gotta take 'em down!"
— Upon spotting Darth Maul

"Incoming! Some kind of sword fighting robot spider thing!"
— Banter with General Grievous, when the Professional "Sportsman" or Raconteur skins are equipped.

"I hope you brought friends, old man."
— Banter with Count Dooku, when the Professional "Sportsman" or Raconteur skins are equipped.

"Lando: What are they paying you? I'll double it.
Boba Fett: No, you won't."
— Banter with Boba Fett

"Boba Fett: What is it today? Gambler? Administrator?
Lando: It's General. "
— Banter with Boba Fett

"Boba: You made the Empire your enemy.
Lando: It felt good! Try it! "
— Banter with Boba Fett

"Boba: The longer you fight, the higher your bounty.
Lando: Maybe I'll turn myself in! "
— Banter with Boba Fett

"You're a Madman!"
— Banter with Darth Vader

"A wealth of victims for Lando Calrissian."
— Heroes vs. Villains Announcer

"Cheater or not, no one puts the 'Grand' in 'Grand Finale' like Lando Calrissian."
— Heroes vs. Villains Announcer

Lando on Starkiller Base 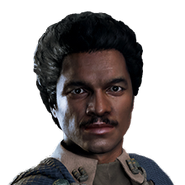