"Our friends are counting on us."
— Intro Dialogue

Princess Leia Organa is a Rebel Alliance Hero in DICE's Star Wars Battlefront. She acts as a counter to the Galactic Empire's support Hero, Emperor Palpatine.

Leia's role as a hero is geared towards supporting her team and keeping enemy troops pinned down. She can spawn a pair of powerful soldiers, two-shot enemy soldiers, drop an enhanced Squad Shield that is more resilient to blaster fire, and can drop Power Ups that other soldiers can pick up.

Leia is armed with an enhanced E-11 Blaster Rifle that deals more damage than a standard E-11 (possible 25-50 damage compared to the regular 15-35). This allows her to quickly take down multiple enemies at long range and defeat an enemy soldier within four shots. The player can also toggle her Trooper Bane ability and easily one-shot enemies, though its fire rate is very slow.

Her Imperial counterpart can be considered Emperor Palpatine due to them having the same role and abilities.

This ability allows any friendly player to spawn next to Leia and become an Alderaan Honor Guard. Honor Guards are armed with an enhanced DH-17 Blaster Pistol and equipped with a Homing Shot and a Smart Rocket. A maximum of two Honor Guards can be present on the Battlefront at any one time.

Trooper Bane: Trooper Bane turns Leia's E-11 into a semi-auto weapon, capable of passing through shields one-shotting enemy players regardless of range. Like all projectiles, the bolt has some travel time, so leading at medium/long range is required if the target is running sideways. It also has a slow fire rate, which can prove worrisome at closer range. Paired with her Enhanced Squad Shield, it can be used to safely snipe enemy players.

Enhanced Squad Shield: The Enhanced Squad Shield is a larger, more powerful variant of the Squad Shield that can also stop Force attacks. As usual, it's best around objectives and other key areas to provide friendly players with cover. Paired with Trooper Bane, it can be used to safely snipe enemy players. Like the regular Squad Shield, kinetic projectiles such as the Cycler Rifle or the Scatter Gun can still penetrate the shield, including Emperor Palpatine's Force Lighting attacks.

Supply Drop: When activated, Leia will drop a random power-up. These can range from Smart Rockets, R5-D4 Droids, or Orbital Strikes, among other power-ups. This ability is very useful since it has the potential to supply friendly players with an infinite amount of power-ups.

In Hero Battles, Hero Hunt, and Heroes vs. Villains, this changes to a Hero Health Pickup and, as the name states, will heal heroes and is the only way to heal heroes besides random spawning hero health. This can be very crucial if one is low on health or an other hero. This health bonus was increased to 50 health in a patch but then later lowered to 40.

It's recommended to use this ability while behind cover since it leaves Leia briefly vulnerable.

Note: Both the power-up and the hero health pick-up can be stolen by enemies so be carful where you put them.

"Protect each other!"
— Upon setting down an Enhanced Squad Shield
"I bet someone could use this!"
— upon dropping a Supply Drop/Hero Health Drop
"For Alderaan!"
— While activating Trooper Bane
"Stay on the offensive."
— while shooting
"Fancy gadgets don't make the man!"
— upon attacking Boba Fett
"It's not over yet..."
— emote
"You scruffy-lookin' nerf-herder!"
— emote
"Aren't you a little short for a stormtrooper?"
— emote
"The Senate will not stand for this!"
— upon attacking Emperor Palpatine
"Darth Vader!"
— When Darth Vader enters the battlefield on Walker Assault and Supremacy.

"Leia Organa serves as an anchor for the team, deploying her enhanced squad shield to provide cover, scattering enemies with her thermal detonators, and punishing villains close to her with her deadly E-11."
— In-game description

Leia wields the Defender Pistol. This deadly short-ranged weapon comes equipped with a secondary fire mode that seeks out enemies and does high damage even at long range; and can be upgraded with Star Cards.

Like the first game, Leia's role is to support her team with her abilities. Her Squad Shield can give teammates cover while her three thermal detonators can take out multiple enemies. Her rapid fire E-11 Blaster Rifle is lethal towards villains and can drain a blocking lightsaber hero's stamina quickly. The Star Cards for her E-11 can upgrade it and make it more effective.

With The Age of Rebellion Update, Leia received a substantial revamp of her abilities. Her E-11 blaster gained increased overall damage and reduced recoil and spread. Her shield was changed to heal friendly forces within it for 5 health every second.

The most dramatic change is the replacement of the Flash Grenade ability with Thermal Detonators; this gives Leia the ability to throw three thermal detonators, which explode after 0.85 seconds, entering cooldown after all detonators have been thrown. These changes were accompanied by replaced Star Cards, specifically that of Blinded with Fearless and Blinding Reveal with Handy Device.

"Use the Alternate Fire on Leia’s Defender pistol to deliver a burst of high damage "
— First hint
"Leia’s E-11 is particularly effective at damaging lightsaber wielders at close range."
— Second hint
"Leia is a versatile hero capable of defending her companions or leading the charge."
— Third hint

"You're a jittery little thing, aren't you?"
— First emote

"I don't know where you get your delusions, laser brain."
— Second emote

"You have your moments. Not many of them, but you do have them."
— Third emote

"All forces, prepare to attack."
— Upon spawning

"This is our most desperate hour."
— Upon spawning

"Lock it down, lock it down!"
— Thermal Detonators

"No Tarkin to hide behind?"
— Encountering Darth Vader

"Focus all fire on the Zabrak!"
— Encountering Darth Maul

"Once again, the fearless determination of the Princess of Alderaan resolves another intergalactic crisis."
— HvV announcer, when a Leia player gets the final game-winning kill

"Organa's filling the garbage chutes."
— Heroes vs. Villains announcer, when a Leia player gets a 5-player killstreak

"The Princess has joined the battle... another Rebel to defeat."
— Empire announcer, when an opposing Leia player spawns

"Princess Organa has been spotted on the battlefront... Vader will want to talk to her."
— Empire announcer, when an opposing Leia player spawns

"The Princess has joined us."
— Rebel announcer, when a Leia player spawns

"Leia Organa has arrived to reinforce us."
— Rebel announcer, when a Leia player spawns

"Princess Leia has come to our aid."
— Rebel announcer, when a Leia player spawns

Leia in the official gameplay trailer for Battlefront

Leia on Survivors of Endor

Leia in her Hoth outfit in Battlefront II 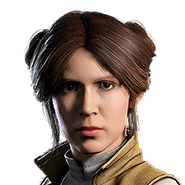 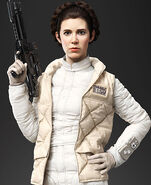 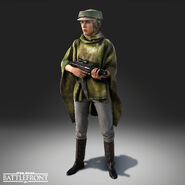