Luke Skywalker has very high movement speed and agility compared to most of the other heroes, which allows him to move around the battlefield much faster than opponents can react. He shares two of his abilities with Darth Vader.

Luke Skywalker was given a hero trait, along with the other launch heroes, in the Rogue One: Scarif Update. Luke Skywalker's trait gives him increased speed with each kill or damage dealt to opposing heroes.

"You have killed enough people!"

"Your evil plans will never come to fruition!"
— Upon attacking Emperor Palpatine 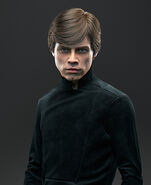 A modded Luke Skywalker skin in a stormtrooper uniform on Sullust

Luke is a very mobile and fast hitting hero. Because of his speed and health regen, he works best as a hit-and-run hero. He also possesses formidable melee prowess through his high stamina and "Intensify" card, which slowly but surely increases his lightsaber damage for every trooper that is defeated or for every 200 damage dealt to heroes, to the point he can one-shot three of the four base trooper classes and potentially deal very high damage to enemy heroes while still maintaining his mobility.

Luke's second ability is Repulse, where he uses the force to knock down nearby enemies surrounding him. This ability won't kill a full health player, but will still deal damage to them. (Note that Luke will be very vulnerable to damage himself, so be wise when using Repulse.)

Luke's third ability is Rush. With this ability, Luke enhances his speed and rushes to the attack. While Luke can use this ability 2 times, if the player has the card "Jedi Reflexes", Luke can use the ability 3 times before going into cooldown. Combining Rush with a Dodge can allow Luke to be very agile, making it very hard for enemies to hit Luke.

Push and Repulse, and also many other abilities in the game, can be affected by a bug that can make the forced movement effect not work while still dealing damage to the enemy, or not damage the enemies while the forced movement effect is properly applied, or even not do anything at all to enemies in range occasionally. It's still a mystery what exactly causes this Day 1 issue. Through the development history of this game, this issue has been improved, but never entirely fixed.

Rush can sometimes cause a bug when Luke dies while performing the ability. This bug persists for a few seconds around Luke's corpse and can stagger enemies that are near it. In the past this bug also damaged enemies, but that got fixed in a previous patch.

"Luke Skywalker has been spotted."
— Empire announcer, when an opposing Luke player spawns.

"We have reports of Luke Skywalker having joined the battle."
— Empire announcer, when an opposing Luke player spawns.

"Luke Skywalker is here. Vader should be informed."
— Empire announcer, when an opposing Luke player spawns.

"Commander Skywalker is here to aid us!"
— Rebel announcer, when a Luke player spawns

"Luke Skywalker has joined the battle!"
— Rebel announcer, when a Luke player spawns 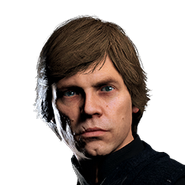