Luke Skywalker is the main protagonist of the Original Trilogy. He is the son of Anakin Skywalker, now dubbed Darth Vader, and has a twin sister (unbeknownst to him) named Leia. He finds the two unfortunate droid servants of Leia, namely C3PO and R2-D2, and after discovering a distress hologram located in R2, meets up with the old, worn-out Jedi Master Obi-Wan Kenobi (Ben Kenobi). From there, Luke is sent on many wild adventures, and becomes a co-leader of the Rebel Alliance. Luke destroys the first model of The Death Star, and faces off with Darth Vader a couple of times, finding out eventually that Vader is his father and defeating the sith lord as well as redeeming him. Skywalker visits such places as Mos Eisley, Hoth, Dagobah, and Endor. Luke witnesses the deaths of such illustrious figures as Obi-Wan Kenobi, Yoda, The Emperor, and Darth Vader. He eventually saves the galaxy and restores the Jedi order.

In the game Luke is very handy with his lightsaber and has a decent Running Attack, as he is able to follow up with a second attack after his first running attack. His basic attack can be helpful with a well placed combo. He can do 3 strikes at one time, though his last strike deals heavy damage.

In the first game, Luke Skywalker uses his Jedi variant (black clothing & green lightsaber) on all standard maps with the exception of Hoth: Echo Base, and Rhen Var: Harbor. On those two maps, Luke looks identical to a Rebel Pilot. If you are playing as the Galactic Empire and heroes are turned on, be careful when getting near Rebel Pilots.

Unlike most heroes Luke has 5 different skins. On Hoth and Rhen Var: Harbor Luke fights in his pilot suit. On Hoth on Star Wars Battlefront I Luke has a helmet on but doesn't in Battlefront II. He has a tatooine farmboy skin but that one was only available with the mod tools! Also, by modding, Luke possesses a stormtrooper skin, which implies that there was supposed to be a death star escape mission in the campaign but it was scrapped along with the Luke stormtrooper skin. 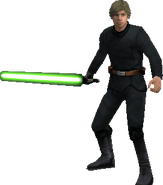 The "Jedi" variant, from all Battlefront I and II maps except from Hoth, Rhen Var: Harbour and Rhen Var: Citadel 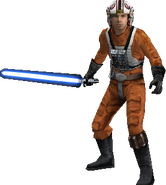 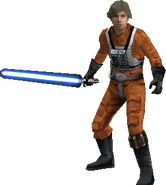 The "pilot" variant, from Battlefront II map Hoth
Add a photo to this gallery 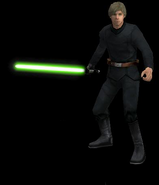 Luke Skywalker on Hoth in Star Wars: Battlefront I.

Luke in Jabba's palace
Add a photo to this gallery

Retrieved from "https://battlefront.fandom.com/wiki/Luke_Skywalker/Original?oldid=90670"
Community content is available under CC-BY-SA unless otherwise noted.