"The massive MTT (Multi Troop Transport) is an armored giant which efficiently delivers hundreds of B1 battle droids to the front lines of war. Once delivered, it supports these troops with devastating heavy armor and weaponry."
— In-game description

The MTT, or Multi-Troop Transport, is a ground vehicle for the Separatists in DICE's Star Wars Battlefront II.

"The MTT is at the heart of the Separatist attack on Theed. Armored, shielded, and heavily armed, only a coordinated attack can bring it down."
— Website description

Although the MTT's movements cannot be directly controlled, Battle Points can be spent to gain control of the transport's turrets for a limited time, similar to the AT-AT from Star Wars Battlefront.

Protecting this vehicle is the objective for the Separatist Alliance in Galactic Assault on Kashyyyk: Kachirho Beach and Naboo: Theed. The Republic attack it on the above locations.

Promotional image of the MTT.

An MTT preparing to deploy Battle Droids on Naboo: Theed.

A side view of the MTT's deployment rack. 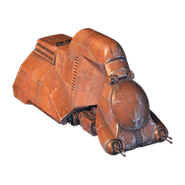 In-game icon for the MTT.