An Icy world in the Outer Rim that houses crystals and various lifeforms, Mygeeto is one of the last worlds on which the Clone Wars took place. It features a Refinery and a Crystal Chamber.

Mygeeto is a crystal planet that is covered with a thick sheet of ice. The buildings and walkways of Mygeeto are all made of metallic ore and the whole place contains high level of technology. The layout of the map lends itself to long-range combat, and you will only be battling close-up if you are in or near one of the buildings trying to take over a Command Post. 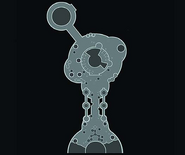 Clones on Mygeeto.
Add a photo to this gallery

Retrieved from "https://battlefront.fandom.com/wiki/Mygeeto:_War-Torn_City?oldid=97450"
Community content is available under CC-BY-SA unless otherwise noted.