"Used by the Naboo Security Force, this sleek patrol craft is well-equipped to protect the skies."
— In-game description

The N-1 Starfighter is a playable starfighter for the Galactic Republic in DICE's Star Wars Battlefront II. It can only be used on Theed, where it replaces the ARC-170 Starfighter used on other maps, as well as in the mode Hero Starfighters as a grunt ship.

"Armed with blasters and torpedoes and equipped with its own astromech, the N-1 can punch hard at ground targets and atmospheric craft."
— Website description

The N-1 starfighter is a versatile fighter. Its laser cannons can cause high damage to enemy fighters and ground targets, which is further amplified by its Weapon Overcharge ability and Proton Torpedoes. Its survivability is also on par with the X-Wing as they share similar health, shields, and the Astromech Repair ability.

The N-1 Starfighter is more than capable of fulfilling multiple roles, such as dogfighting with other starfighters, attacking objectives, and conducting ground attacks against infantry.

The Astromech Repair ability regenerates any lost health to the N-1 Starfighter, and can be used in order to increase the survivability of the ship in cases of prolonged pursuits.

With the Weapon Overcharge ability, the N-1 Starfighter supercharges its main weapon in order to unleash high damage to any target. This ability can also be used to deal heavy damage to the MTT when exposed, or to obliterate ground infantry and vehicles.

The Proton Torpedo can lock onto enemy starfighters and be used in a fire and forget manner, and can also be used to attack objectives, infantry, and enemy AATs. A well-placed torpedo can deal tremendous damage to any enemy, including Heroes and Armor. The Proton Torpedo can be dumbfired by double-tapping the ability, while tapping it once and keeping sight of a target allows it to lock on. 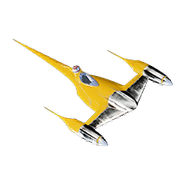 In-game icon for the N-1 Starfighter.