Naboo is a planet featured in DICE's Star Wars Battlefront II. It has two multiplayer maps. The planet is also visited in the campaign mission "Royalty."

One of the many temperate planets in Battlefront II, Naboo differentiates itself from Takodana or Endor in its predominantly urban map of Theed. Depending on the mode, players fight in the city streets, inside the Royal Palace, or in a palace hangar.

The following is a list of maps that are set on Naboo and the modes they appear in:

Painting that appears in the royal palace 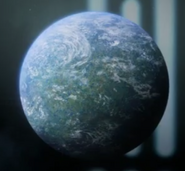