It is the planet very similar to Earth. This Map features the Capital city of Naboo where the Trade Federation took over in 32 BBY. Naboo Theed also contains the Theed Palace where Queen Amidala once lived. The many buildings and winding streets make for a lot of close combat, even with the addition of tanks. Although the palace is visible through its gates, its interior is never seen. This said, it is possible to gain elevation on other buildings for sniping. The maps of I and II are almost the same, other than switching from day (Battlefront) to night (Battlefront II) and some minor cosmetic changes to the several water fountains found throughout the map. The Palace command post was also moved more towards the gate closer to the Rotunda when Battlefront 2 was released, rather than it remaining by the gate to the Palace.

At the start of the battle, one faction will control the guardhouse and the embassy, while the other controls the plaza and the office. The command-posts at the rotunda and the square outside the palace gates are initially neutral.

Armour is available from the embassy and the plaza command-posts. It is also available to the team that holds the palace square.

The central focus-point of the map is the palace square and its exposed command-post. The square is very open, lacking substantial cover and being overlooked by numerous elevated areas, including a large balcony which stretches between the plaza and the embassy. There are also laser turrets dotted around the square. It is in this square where the majority of the fighting occurs in the map, at least at the onset of the battle.

Another point of interest is the rotunda command-post, which bar a small water fountain, also remains very exposed. The rotunda is cut-off from the rest of the map by a canal, but their are three bridges for infantry to cross and repulsor-lift tanks can also navigate the stretch of water. 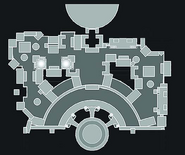 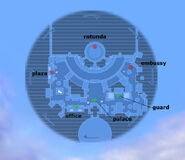 The map in Star Wars: Battlefront.

The gates to the palace.

A blue Jet Trooper on the beta version of this map.

A beta version of this map.

Clone Troopers on Naboo (Battlefront).
Add a photo to this gallery

Retrieved from "https://battlefront.fandom.com/wiki/Naboo:_Theed/Original?oldid=90190"
Community content is available under CC-BY-SA unless otherwise noted.