"Obi-Wan was a Jedi Master and General of the Galactic Republic during the Clone Wars, he commanded the 212th Attack Battalion and defeated General Grievous on Utapau."
— In-game description

Obi-Wan Kenobi is a Galactic Republic Hero in DICE's Star Wars Battlefront II.[1][2] He was added to the game on November 28, 2018, as part of the Battle of Geonosis Update.[3][4] He originally cost 35,000 credits to unlock but this cost was removed in the Capital Supremacy Update.

Much like Yoda, Obi-Wan Kenobi is an expert at turning defense into offense, though in a different way. While Yoda's defensive strengths come in the form of his Unleash ability, where he absorbs blaster fire and propels enemies forward, Obi-Wan Kenobi's comes in the form of his high stamina, allowing him to deflect blaster bolts and other lightsabers for longer. He also possesses higher than average max health regen, which can be increased further with a Star Card.

Obi-Wan's defensive strength can also be seen in his right ability, Defensive Rush, where Obi-Wan lunges forward at enemies in a lightsaber rush, all the while accurately deflecting any attacks. You can shoot him from the back, though he takes reduced damage.

The Jedi mind trick is an iconic ability of Obi-Wan's. While Rey uses her mind trick to confuse enemies and invert their controls, Obi-Wan's mind trick prevents enemy players from using their abilities.

Finally, Obi-Wan has a powerful Force push inspired by his use of the Force as seen in particular in Revenge of the Sith. Obi-Wan is able to charge up this ability; the longer it is charged, the more powerful the blast is in terms of the range at which enemies are affected as well as the damage of the ability.

"Only a Sith deals in absolutes."
— Second emote

"The strongest defense is a swift and decisive offense."
— Third emote

"This is the last time Cody takes a day off."
— Upon spawning

"There is no chaos, there is harmony."
— Reciting the Jedi Code

"There is no death, there is the Force."
— Reciting the Jedi Code

"There is no passion, there is serenity."
— Reciting the Jedi Code

"There is no ignorance, there is knowledge."
— Reciting the Jedi Code

"There is no emotion, there is peace."
— Reciting the Jedi Code

"Blasters? Well, no accounting for taste, is there?"
— Facing off against an enemy with a blaster weapon

"You want to rethink your actions."
— Using Restrictive Mind Trick

"Army or not, you must realize you're doomed."
— In battle

"Obi-Wan: Why do I get the feeling you’re gonna be the death of me?
Anakin: Don't say that, Master."
— Banter between Anakin Skywalker and Obi-Wan Kenobi

"Obi-Wan: I thank the stars Qui-Gon never saw what you've become.
Dooku: Have you considered my old apprentice might have joined me as you should?"
— Banter between Count Dooku and Obi-Wan Kenobi

"Obi-Wan: Your master really should have taught you not to be so impulsive.
Grievous: The way you have with young Skywalker?
Obi-Wan: Touché..."
— Banter between General Grievous and Obi-Wan Kenobi

"Must we do this again, General?"
— Banter with Grievous

"Why is it I always seem to attract the bounty hunters?"
— Banter with Boba Fett

"So, tell me, Mandalorian... what clan are you from?"
— Banter with Boba Fett

"Oh, no. Fighting enemies in jetpacks never gets old."
— Banter with Boba Fett

"Challenging a Jedi? You don't lack for confidence, I'll give you that."
— Banter with Boba Fett

"Shouldn’t you be off babysitting Boba Fett or something?"
— Banter with Bossk

"Your perversion of the Force ends here."
— Banter with Emperor Palpatine

"You're more machine than man."
— Banter with Darth Vader

"Used to be so easy when you knew the good guys wore the armor."
— Banter with Iden Versio

"When I cut you in half, I should have aimed for your neck instead."
— Banter with Darth Maul

"I defeated you before, and I will defeat you again!"
— Banter with Maul

"Maul. Perhaps this time will be the end of it."
— Banter with Maul

"I didn't realize they came in silver."
— Banter with Captain Phasma

"Goodness... you're not one to trifle with, aren't you?"
— Banter with Phasma

"It'll take more than a helmet and a cape to intimidate me."
— Banter with Phasma

"Kenobi brings the Death Sticks."
— Heroes vs. Villains announcer, when an Obi-Wan player goes on a 5-player killstreak

"A surprisingly civilized climax, as Obi-Wan Kenobi proves once more why triumph is his specialty."
— Heroes vs. Villains announcer, when an Obi-wan player gets the final game-winning kill

"A Jedi has been spotted. Looks like... Kenobi."
— Separatist announcer when an opposing Obi-Wan player spawns

"Master Kenobi is now fighting with the Clones."
— Separatist announcer when an opposing Obi-Wan player spawns

"Kenobi is here to support us!"
— Republic announcer when an Obi-Wan player spawns

"We're getting support from Master Kenobi!"
— Republic announcer when an Obi-Wan player spawns

"Master Kenobi has joined us!"
— Republic announcer when an Obi-Wan player spawns

Promotional image of Obi-Wan Kenobi in his Robed appearance. 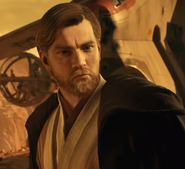 Obi-Wan Kenobi, Robed, as he appears in the Battle of Geonosis trailer. 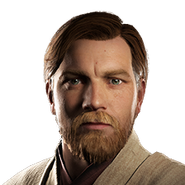