< Obi-Wan Kenobi
Edit
watch 02:46
The Quarry - The Loop
Do you like this video?
Play Sound

Obi-Wan Kenobi is a major character in the Star Wars saga, appearing as one of the protagonists of the prequel trilogy and an important character in the original trilogy. Obi Wan is a Jedi who initially trained under Qui-Gon Jinn, until his death at the hands of Darth Maul. After the tragic death of his Master, Obi-Wan took on a young Anakin Skywalker as his apprentice and the two fought together in the Clone Wars. Near the end of the war, Obi-Wan fought and killed General Grievous, and then was one of the few survivors of The Great Jedi Purge. He later learned about Anakin falling to the Dark Side and was forced to fight his former apprentice, now the Sith Lord Darth Vader, on Mustafar. Obi-Wan defeated Vader, casting him into the lava rivers of Mustafar, but couldn't bring himself to kill him and, thus, Vader survived his injuries and later became an even more horrible monster fueled by rage, who would go on to serve the Galactic Empire. Obi-Wan exiled himself on Tatooine, where for years he would look after Vader's son Luke Skywalker, until he could train him to become a Jedi and defeat Vader. Eventually, Obi-Wan briefly began training Luke, but during a confrontation with Vader on the Death Star, he let his former apprentice strike him down and became "one with the Force." Despite his death, Obi-Wan continued guiding Luke as a Force spirit, telling him to meet Mater Yoda to complete his training, and even appearing to Luke alongside the spirits of Yoda and a redeemed Anakin following the Rebel Alliance's victory against the Empire at the end of Return of the Jedi.

In the game, Obi-Wan is a great fighter, and his lightsaber battling covers a large range around him, killing many foes. He also has a killer running attack.

Obi-Wan Kenobi is a fast-paced fighter, and wields a blue-bladed lightsaber. His attacks consist of rapid strikes. Kenobi is capable of jumping four times consecutively, enabling him to reach high altitudes fast. When jumping, Obi-Wan is able to attack with a single swipe. When sprinting, Obi-Wan can attack with a decently accurate flurry of attacks, which stops his momentum. 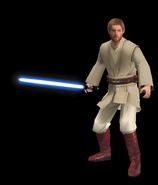