"Compassionate and strong willed, the Ovissian Gunner uses the might of both her strength and her modified rotary cannon to combat enemies threatening her Resistance allies."
— In-game description

The Ovissian Gunner is capable of massive damage output to enemy units.

Her Modified Z-6B Rotary Cannon can chew through the health of any troopers or heroes caught in its line of fire. She can take down enemy vehicles and shielding with ease with the Anti-Armor Mode of her weapon. Although one drawback is it takes a short while to switch between her standard firing mode and Anti-Armor Mode, along with the charge up required before firing the weapon.

Should her path be blocked by an enemy, she can use the Charge ability to knock them down, with the attack being so powerful that it can kill three of the four base classes. This opens up her enemies to further attacks should they survive the initial Charge. After knocking down the enemy, the unit has a disadvantage of spooling the weapon again, giving the enemy an advantage of killing the unit before she can re-spool the cannon

The Ovissian Gunner in the Rise of Skywalker trailer. 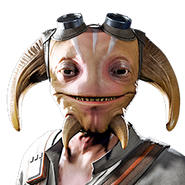 In-game icon for the Ovissian Gunner. 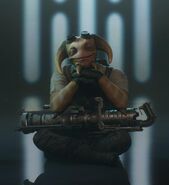