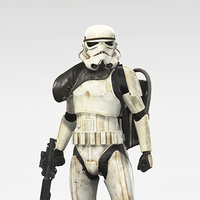 Stormtroopers wear pauldrons to indicate a unit leader and/or a specialist. Such troopers were made available as skins on September 20, 2016. Black, white, red and orange pauldrons are available. Unlike the regular stormtrooper, these troopers don't change their armor on any maps except Outpost Beta, Twilight on Hoth, Ice Caves and Rebel Base.

Pauldron Stormtroopers were introduced to bring extra variety into the Imperial character customization following the removal of the disliked helmet-less Stormtroopers.

The first pauldron, black, is unlocked at rank 20, with white becoming available at rank 30, orange at rank 40 and finally red at rank 50. All pauldron colors cost 7,500 credits to unlock, except for red which costs twice as much as it's 15,000 credits. Purchasing all colors in one run would cost 37,500 credits. 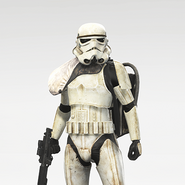 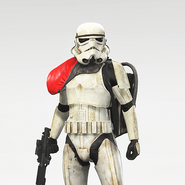 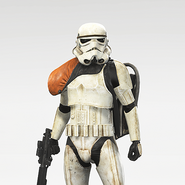 Orange Pauldron
Add a photo to this gallery

Retrieved from "https://battlefront.fandom.com/wiki/Pauldron_Stormtrooper?oldid=87314"
Community content is available under CC-BY-SA unless otherwise noted.