"From the pilot's seat of his custom X-wing, Black One, Poe Dameron leads his squadmates and helps them get a jump on the opposition."
— Star Wars Battlefront II website

Black One is a playable hero vehicle featured in DICE's Star Wars Battlefront II. It is Poe Dameron's X-Wing.

Poe Dameron's Black One is arguably one of the best all-around starfighters in Star Wars Battlefront II. It's one of two hero ships that has four abilities (the other being Iden Veriso's TIE Fighter). Its abilities help Black One become an versatile starfighter and it can fit numerous roles, including support craft, strike bomber, and interceptor. The abilities BB-8 Repair and Boosted Accelerator Pod greatly increase the survivability of Black One, making it a extremely difficult starfighter to shoot down if the enemy isn't able to disable the starfighter or get into a good firing position. The Black Leader ability reveals all enemy targets in a large radius to Poe and his allies, and with the highlighted targets recieving increased damage from all sources, making Black One a great support craft. Furthermore, it can hit enemy targets hard with its Dual Proton Torpedoes, which can be fired while being boosted by the Boosted Accelerator Pod, allowing Black One to attack enemy targets at an impressive speed.

Promotional image of Black One flying through a Resurgent-class Heavy Battlecruiser. 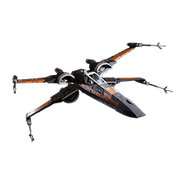 In-game icon for Black One.