Pollux Assassin Droids were units of droid that were taller than a human, and somewhat resembled Super Battle Droids in size and physique. They had an angular humanoid chassis, and lean faces, dominated by four red photoreceptors beneath a sharp, swept-back crest. Although their primary function was the assassination of specific targets, these droids typically fought in sizeable teams, overpowering their targets with firepower and combat skill rather than stealth. They seem to have been used sparingly, and on both their recorded front-line deployments, they were sent against groups of Jedi at the direct command of the most senior Separatist commanders.

Like all the new units in the two handheld console Battlefront games the player can choose the weapons, the markings and colours of these droids in the personalisation menu. 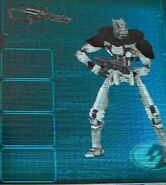 Add a photo to this gallery
Retrieved from "https://battlefront.fandom.com/wiki/Pollux_Assassin_Droid?oldid=79353"
Community content is available under CC-BY-SA unless otherwise noted.