A-Wings are fast and capable interceptor spacefighters that are known for their fast speed. They are often utilized to take out enemy ships in space combat. The A-wings are collectively under the call sign Green Squadron. Players often choose the A-Wing as a primary ground strafing vehicle, as they are fast and can cause massive damage to enemy players

A-Wing has one primary weapon and two special abilities for use:

Speed Boost: The first ability for the A-Wing. It gives you a burst of speed for a short time. Useful for evading an enemy lock-on. This was originally a shield ability before a patch from the Death Star DLC changed it.

"Since the early days of the Rebellion, the RZ-1 A-wing's speed and agility has proved an effective counter to Imperial starfighters."
— In-game description

The RZ-1 A-Wing returns in DICE's Star Wars Battlefront II as an Interceptor unit. It is playable on Starfighter Assault, and certain Galactic Assault maps.

"A-wings are peerless escorts and hunters, getting in, firing, and speeding away, leaving only enemy wreckage behind."
— Website description

The A-Wing excels at hunting down and engaging other starfighters. As an interceptor, it makes use of its impressive speed and maneuverability in order to close in on its enemies and to shake off pursuers.

The Afterburner ability grants a speed boost to the A-Wing, and can be used in order to break missile locks and to shake pursuers.

With the Hard Lock ability, the A-Wing can dedicate itself into hunting down single targets by dealing increased damage, locking onto them faster, and being unable to lose them. The Hard Lock ability can also be used in order to take down Hero Starfighters faster, and can also be used on certain objectives for increased damage.

The Concussion Missile ability allows the A-Wing to briefly disorient enemy starfighters it hits, along with being able to blind soldiers on the ground that are near the explosion. While not as powerful as torpedoes from the Fighter or Bomber, the Concussion Missile is still capable of finishing off weakened targets.

The A-Wing is a prime dogfighter. Use its speed boost to get the edge on your opponents or to get away from them, and then destroy them with the laser cannons and missile launcher. 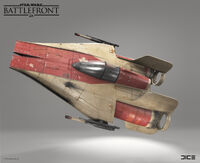 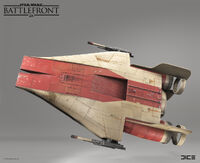 A TIE Interceptor in an intense dogfight with an A-Wing. 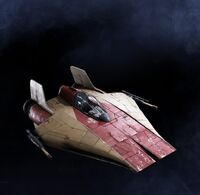 Promotional image of the RZ-1 A-Wing. 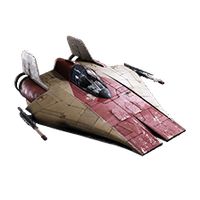 In-game icon for the A-Wing in Star Wars Battlefront II.