Rahm Kota is a Jedi hero for the Rebel Alliance in Rebellion Developments' Star Wars: Battlefront: Elite Squadron. In the game's campaign, he is responsible for training the Force-sensitive Clone Trooper X2 in the ways of the Jedi. Interestingly, besides being featured in the campaign, the only other time he can be played is in the game mode Heroes and Villains. 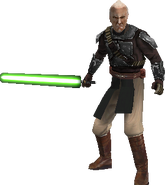 Retrieved from "https://battlefront.fandom.com/wiki/Rahm_Kota?oldid=97924"
Community content is available under CC-BY-SA unless otherwise noted.