Rebel Raider is a Challenge mission found only in the PSP version of Star Wars: Battlefront II. The mission consists of finding objects and returning them to certain locations. The objects and amounts vary from each level of the Challenge. A count of objects you've collected replaces the standard Reinforcement count. The player has no teammates, and must survive against a full enemy team. Progress is saved in this mode if you exit during a level.

Your mission is to steal from the galaxy's opperessors for the Rebellion. Locate the contraband and return it to your base.

Rebel Raider: Our intelligence has found valuable equipment on the planet Mygeeto. Navigate the planet's battle worn surface to retrieve four inactive shield generators and bring them to the center of the city.

Rebel Raider: The once peaceful planet of Naboo has become an imperial stronghold. We need you to acquire plans to the Empire's prototype weapons, and bring them to the gates at the palace of theed. We may yet be able to free the world from imperial tyranny.

Rebel Raider: We won't last long against the onslaught by the Empire. We will continue to defend the base, but you must navigate through the incoming imperial forces to acquire five imperial droids, and then escape the planet. The Alliance is counting on you.

Rebel Raider: While our Rebel forces create a diversion with a direct attack on the invading imperial troops, you must fly ship to ship to retrieve plans for the Empire's latest weapons and vehicles, and return them to the Rebel engine room. We trust you can handle this difficult assignment.

The Rebel from the Loading Screen for Rebel Raider

The Tutorial Screen for Rebel Raider 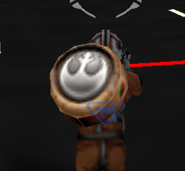 A Rebel Raider Object being Carried by a Rebel Pilot
Add a photo to this gallery
Retrieved from "https://battlefront.fandom.com/wiki/Rebel_Raider?oldid=80028"
Community content is available under CC-BY-SA unless otherwise noted.