"The Rebel Rocket-Jumper is an effective opponent against vehicles. Her JETPACK allows for unpredictable strikes from mid-air."
— In-game description

The Rebel Rocket-Jumper's A280C deals increased damage as compared to the existing default blaster for the Rebel Soldier, and can provide reliable firepower with its relatively low heat per shot and low venting time. The weapon's increased damage means that the Rocket-Jumper is capable of outgunning most targets in single engagements and can deal even more damage by landing headshots against them; along with its Rocket Launcher to deal with tightly clumped groups of enemies. Combining this with the jetpack means that the Rocket-Jumper can position itself behind or above enemies, and rain a hail of devastating fire upon them.

While the Rebel Rocket-Jumper has strong firepower at her disposal, she has considerably low health for a Reinforcement, matching up with the Heavy with only two hundred health before Star Cards are applied. As a result she cannot take much punishment, and must resort to her mobility and cover in order to stay in the fight. If faced with unfavorable odds, she can use two of her abilities, Jetpack Boost and Jetpack Dash, in order to make a quick escape but can also depend on her dodge in order to quickly build space between an enemy or to close the distance with them. 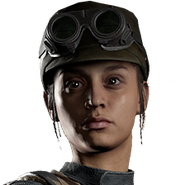 Original in-game icon for the Rebel Rocket-Jumper, found in the Beta files. 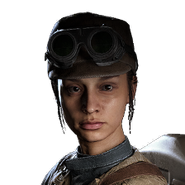 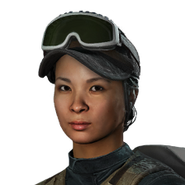 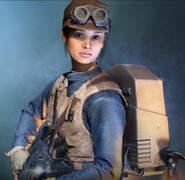 The old model for the Rebel Rocket-Jumper.

The Rebel Rocket-Jumper in Mos Eisley on Tatooine.

The old Rebel Rocket-Jumper with its former appearance and A280 blaster rifle.
Community content is available under CC-BY-SA unless otherwise noted.
Advertisement