watch 02:48
Wiki Targeted (Games)
Do you like this video?
Play Sound

The main unit of the Rebel Alliance, the Rebel Soldier is equipped with basic weapons for taking out the enemy units.The Rebel Soldiers are the all-purpose infantry, and the Rebel Alliance team will probably be mostly comprised of these guys. (Equivalent to- Super Battle Droid, Stormtrooper, Clone Trooper) The trooper has the average toughness, shared with the smuggler. Though tougher than the Marksman or the Bothan Spy, they cannot take as many hits as the Vanguard, and they can take only about half as much damage as the Wookiee Warrior. 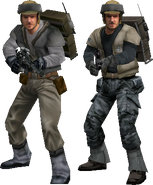 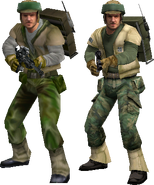 The "fleet" variant, from Battlefront II maps Death Star and Tantive IV
Add a photo to this gallery 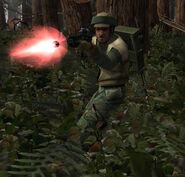 A Rebel Trooper on Endor.

A Rebel Soldier on a speeder bike.

Rebel Trooper engaging Stormtroopers on Cloud City.
Add a photo to this gallery

Retrieved from "https://battlefront.fandom.com/wiki/Rebel_Soldier/Original?oldid=102820"
Community content is available under CC-BY-SA unless otherwise noted.