The GR-75 Medium Transports, or Rebel Transports as they are more commonly known, were used during the evacuation of Hoth. They were acquired quite cheaply and lack any sort of standard armament. In Star Wars: Battlefront II, they are used as stationary ships on the Hoth Hunt and CTF map.

The frigate is either armed with auto turrets or no turrets at all. Docking and spawning at this frigate is impossible, as it serves as a support ship and thus cannot be entered or controlled, but fires automatically and may be destroyed. One of these frigates are always near a capital ship in Star Wars: Battlefront II Space Combat maps. 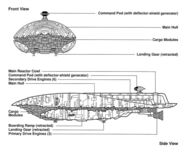 Rebel Transport Schematics.
Add a photo to this gallery

Retrieved from "https://battlefront.fandom.com/wiki/Rebel_Transport?oldid=88940"
Community content is available under CC-BY-SA unless otherwise noted.