The Rebel Vanguard is the Rebel Alliance unit built for heavy damage towards tanks, turrets, and other objects with lots of health. They don't have a very good aim with their Rocket Launcher and your target is almost always moving so it is best to lock on. They can also be used for disposing of nearby units in one shot (or a few, if they are heroes), but be careful- these guys don't pack that much ammunition. (Equivalent to- Assault Droid, Shock Trooper, Clone Heavy Trooper) The Rebel Vanguard is a very tough unit, tougher than any of the normal class, with only the Wookiee Warrior being tougher.

The “fleet” variant, from all Battlefront I maps except Rhen Var: Harbour, Rhen Var: Citadel and Hoth: Echo Base.

The “snow” variant, from Battlefront I maps Rhen Var: Harbour, Rhen Var: Citadel and Hoth: Echo Base.
Add a photo to this gallery 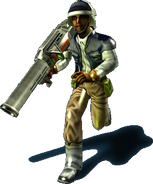 A Rebel Vanguard on Naboo.

A Rebel Vanguard on Tatooine.
Add a photo to this gallery

Retrieved from "https://battlefront.fandom.com/wiki/Rebel_Vanguard?oldid=87817"
Community content is available under CC-BY-SA unless otherwise noted.