The Republic Attack Cruiser, also known as the Venator-class Star Destroyer, is a Galactic Republic starship featured in Star Wars: Battlefront II. It serves as the flagship of a Republic task-force in all major Republic space engagements in Star Wars: Battlefront II. It features two hangars, one on the starboard side, and one on the port side, although only one is usable in naval combat, and the other is sealed off by docking doors. the cruises has 2 acclamator assault ship escorts sometimes 3. From the hangar spawns the Republic starfighters for the engagement - Republic Interceptors, V-Wings, ARC-170 Starfighters, and LA-AT Gunships.

Control Tower
Add a photo to this gallery 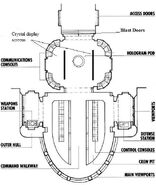 The Bridge of a Venator.
Add a photo to this gallery

Retrieved from "https://battlefront.fandom.com/wiki/Republic_Attack_Cruiser?oldid=100328"
Community content is available under CC-BY-SA unless otherwise noted.