"The Resistance Rocket-Jumper's jetpack gives her a greater movement range. She is best deployed against vehicles, but her powerful rifle makes it easy to deal with other opponents as well."
— In-game description

The Resistance Rocket-Jumper is the Aerial Reinforcement unit for the Resistance in DICE's Star Wars Battlefront II.

The Resistance Rocket-Jumper is equipped with the EL-16HFE as her blaster. Like all Aerial units, she also brings into battle a jetpack that is capable of some flight through propulsion forward and upward. She also wields a precise rocket launcher.

The Resistance Rocket-Jumper's EL-16HFE does increased damage as compared to the one available to the Assault class, and the nature of her jetpack allows her to get to higher ground or behind her enemies in order to inflict considerable damage with it or her Rocket Launcher. Landing headshots with the EL-16HFE deals immense damage, and can prove devastating towards enemies such as Villains or reinforcements. The EL-16HFE performs well against distant targets as the Stock Mod assists in controlling the weapon's recoil.

While the Rocket-Jumper's EL-16HFE deals strong damage, the low rate of fire means that she must land her shots accurately when faced with an enemy up close. This is further compounded with her considerably low health for a Reinforcement, matching up with the Heavy with only two hundred health before Star Cards are applied. As a result she cannot take much punishment, and must resort to her mobility and cover in order to stay in the fight. If faced with unfavorable odds, she can use two of her abilities, Jetpack Boost and Jetpack Dash, in order to make a quick escape but can also depend on her dodge in order to quickly build space between an enemy or to close the distance with them. 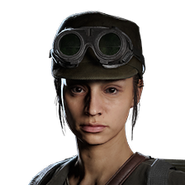 In-game icon for the Resistance Rocket-Jumper.

Retrieved from "https://battlefront.fandom.com/wiki/Resistance_Rocket-Jumper?oldid=102582"
Community content is available under CC-BY-SA unless otherwise noted.