"In the hands of Rey and Chewbacca, the Millennium Falcon aids the Resistance in their fight against the First Order."
— In-game description

Rey and Chewbacca's Millennium Falcon is a hero vehicle in DICE's Star Wars Battlefront II available for the Light Side in the game modes Starfighter Assault and Hero Starfighters.

This rendition of the Falcon can't gain a speed boost, but makes up for it with its Focused Mind and Auxillary Power abilities, which hard-locks to an unlucky enemy and repairs the ship, respectively. Pair the Focused Mind and Dual Concussion Missiles to deal unavoidable damage to an enemy. When you're chasing an objective through enemy flak, activate the Auxillary Power ability to give the Falcon damage resistance. 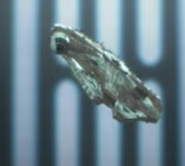 Add a photo to this gallery
Gallery[edit | edit source]

Retrieved from "https://battlefront.fandom.com/wiki/Rey_and_Chewbacca%27s_Millennium_Falcon?oldid=102528"
Community content is available under CC-BY-SA unless otherwise noted.