"To bolster their droid army, the Trade Federation created the Single Trooper Aerial Platform as a swift and agile solution for patrol and reconnaissance. The STAP's designers customized the respulsorcraft's dimensions to fit the B1 battle droids."
— In-game description

The STAP (Single Trooper Aerial Platform) is a Speeder vehicle for the Separatists in DICE's Star Wars Battlefront II. It was released on November 28, 2018 along with the new Geonosis map in Galactic Assault.[1]

The STAP speeder is available for the Separatists. It is only available on Geonosis in Galactic Assault, but available in every map in Capital Supremacy.

The STAP possess weak firepower but does have high speed, allowing it to traverse the map in a short amount of time.

A behind-the-scenes developer sneak peek of the STAP. 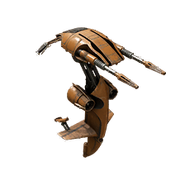 In-game icon for the STAP.