The STAP, or Single Trooper Aerial Platform, is a small repulsorlift Air-hook that appeared in Star Wars: Battlefront and its sequel. In the first game it is a vehicle that units of the Trade Federation and CIS can use, while in the sequel it is exclusive to the Separatist classes. Each STAP is equipped with a pair of twin blasters which are great for killing infantry with. They are not rugged but are fast and maneuverable yet the occupant can be sniped or disintegrated by a missile hit along with the vehicle itself.

They are not as fast as the 74-Z Speeder Bike or the BARC Speeder, but they can strafe from side to side. This gives it a distinct advantage in combat against troops, and a large disadvantage during hit and run attacks. It can only be repaired by an engineer class.

The pilot is a major weak point, though firing rockets gives a similar effect.

A droid on a STAP. 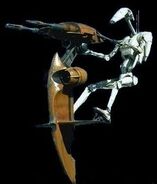 Another view.
Add a photo to this gallery

Retrieved from "https://battlefront.fandom.com/wiki/STAP/Original?oldid=94960"
Community content is available under CC-BY-SA unless otherwise noted.