Saber Throw is an attack available only to Jedi and Sith Heroes. When you use this attack, your unit will throw their lightsaber in the direction you are aimed. This leaves you without a defense for a brief moment, and may get you killed, so use it wisely. Regular units will be killed on contact, but heroes will usually be able to withstand one hit, so try and make the saber pass through them on both the way out and the way back. It can also be used to finish off enemies with only a little health left. Some players find it useful to try and 'snipe' with their saber throw. This is when they go up to a high point and try to hit distant enemies with their saber throw. This is a very damaging attack for these heroes, and should be used often. 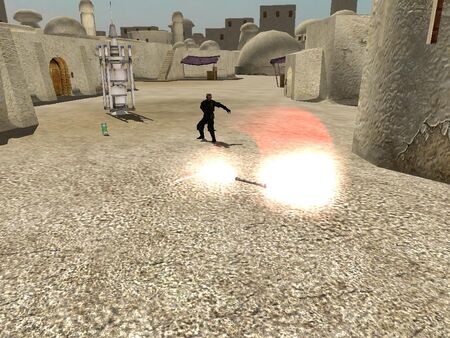 Retrieved from "https://battlefront.fandom.com/wiki/Saber_Throw?oldid=87428"
Community content is available under CC-BY-SA unless otherwise noted.