Scarif is a planet featured in DICE's Star Wars Battlefront, added as part of the Rogue One: Scarif expansion pack, and later added in Star Wars Battlefront II as part of the Battle on Scarif Update.[1][2] A tropical, oceanic world outfitted with Imperial installations and bases, Scarif hosts top secret research and projects for the Imperial Military, including the Death Star, and was the site of the first battle of the Galactic Civil War between the Empire and the Rebel Alliance.

In Battlefront, three maps are set on Scarif itself, Landing Pad 13, Scarif Beach, and Scarif Jungle, while one map takes place in the space around Scarif, Shield Gate. In Battlefront II, a map named Scarif Beach was added on April 29, 2020 as part of the Battle on Scarif Update.

A map set on Scarif arrived to DICE's Star Wars Battlefront II in April 2020's Battle on Scarif Update. The map is set on one of the tropical islands at a distance from the Citadel. The map features palm trees, sand bars, and crystal clear waters. It also features two daytime variants: day and sunset.[3][4]

The following is a list of maps set on Scarif:

Scarif is an idyllic world dominated by water, littered with islands, and full of palm trees and other vegetation. The maps included in the DLC explore the islands of Scarif as well as the Imperial blockade protecting the planet. Although the Citadel Tower can be seen in all three land maps, no one can actually explore the tower's interior and they remain quite distant from the imposing building.

The following is a list of maps set on Scarif: 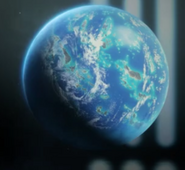