Scout troopers are soldiers in the Stormtrooper Corps who were often used for patrols and were used less than regular stormtroopers. They were noticeable for their use of speeder bikes, hence their nickname. 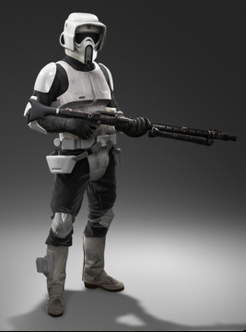 Scout Troopers return in DICE's Star Wars Battlefront II as the Specialist unit for the Galactic Empire. Their default abilities are the Shock Grenade, Infiltration, and the Thermal Binoculars, though these can be swapped out and upgraded via Ability Cards. Their primary blaster rifle is the DLT-19X.

Add a photo to this gallery
Retrieved from "https://battlefront.fandom.com/wiki/Scout_Trooper?oldid=84801"
Community content is available under CC-BY-SA unless otherwise noted.