This is about a shuttle available in Battlefront Renegade and Elite Squadron, you may be looking for a MOD vehicle of the same appearance.

The Sentinel-class Landing Craft is a troop transport ship that is used by the Galactic Empire. It appears as a non playable troop transport, on the Kamino map. This ship is only seen on Kamino and the Prison Break level on the Death Star in campaign mode, where you have to destroy one. This ship was originally going to be used in the Imperial space maps, but was replaced in pre-production by the the Theta-class shuttle. It does however, appear as a flyable ship type (Imperial Shuttle) in Battlefront Elite Squadron. 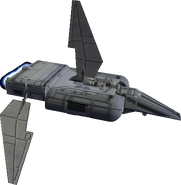 Another view of it. 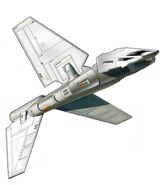 A Landing Craft.
Add a photo to this gallery

This ship, due to its pre existing model and weapon set up, is often used in mods; most notably as playable vehicle, replacing the Theta-class shuttle in the Dark Times Rising Son MOD.

Retrieved from "https://battlefront.fandom.com/wiki/Sentinel-class_Landing_Craft?oldid=87448"
Community content is available under CC-BY-SA unless otherwise noted.