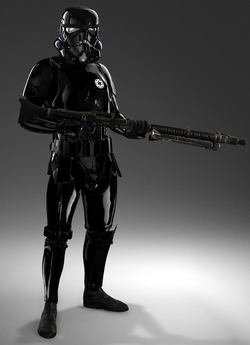 17,000
Shadow Troopers are an unlockable Imperial skin in Star Wars Battlefront. They are unlocked at Rank 50, for 17,000 credits. Their armor doesn't change regardless of what planet they're on.

In Survival mode, these troopers are arguably one of if not the most dangerous enemies in the game, as they carry a Flash Grenade, which can stun the players, and they can use Stealth to cloak and disappear from the player's view and radar. This makes them dangerous, as they have the potential to reappear anywhere, and ambush you.

Shadow Troopers possess a cloaking device that renders them effectively invisible and allows them to blend in with the environment. This gives them the ability to move unseen to reach unexpected locations and attack from there.

When a Shadow Trooper cloaks, the cloaking device does not render them fully invisible, as their outline remains visible to the player, and the area they occupy appears as wavy and visually distorted. If the player uses an X-8 Night Sniper blaster pistol, the heat scope will show cloaked Shadow Troopers.

Although the T-21 Heavy Blaster they carry can cause a lot of damage, the Shadow Troopers have less health than Shock Troopers, relying primarily on stealth and surprise to attack the player. The best way to defeat them is to use a blaster with equal damage or to stay aware and be ready to react quickly to one appearing out of thin air.

Despite being in the game, Shadow Troopers never appeared in the original trilogy, and made their debut in the Expanded Universe.

Retrieved from "https://battlefront.fandom.com/wiki/Shadow_Trooper?oldid=100034"
Community content is available under CC-BY-SA unless otherwise noted.