"Enduring punishment unimaginable to any organic, General Grievous pursued the obliteration of his enemies whatever the cost. Frequently broken beyond repair, Grievous's cybernetics were easily replaced but his conquests would stand the test of time."
— In-game description

Shattered Armor is a Legendary appearance for General Grievous in DICE's Star Wars Battlefront II. It costs 80,000 Credits or 2,000 Crystals to unlock.

The Shattered Armor skin is an original appearance created by the Star Wars team at EA DICE. It does seem to be loosely inspired by General Grievous's cybernetic body as it catches on fire and subsequently explodes in Revenge of the Sith during the Battle of Utapau. This is when General Grievous is defeated in combat and killed by Obi-Wan Kenobi. The skin also includes part of General Grievous's iconic black cape. 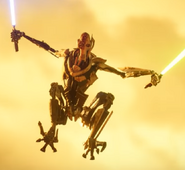 General Grievous, shattered, leaping in the air on Geonosis.

Promotional Image for the Shattered Armor appearance, which had been used in event calendars but only released in HD on the Steam Store.