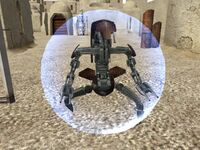 Shield Emitters are functions of the Droideka's body that allow it to fully protect itself.

It emits a blue shield that absorbs all incoming damage. While activated, the Droideka takes basically no damage, making it ideal for clearing out enemy infantry and protecting fellow droids. The emitters do wear out, though, and the amount of energy left is indicated by a power meter at the left of the screen in the same place as the jetpack meter would be. If the shield receives any form of damage, the meter will start dissipating at steady pace, along with that, suffering additional damage makes the shield meter go down even faster. When it runs out, the shield turn off until it recharges fully, at which time you will be able to turn them back on again without the meter dissipating. Attempting to turn on the shield before the meter has fully recharged will successfully activate the shield but the power meter will start dissipating, even without getting shot. It is a very nice addition to the droideka, and the lifeline by which it is able to effectively damage. Although powerful, it is vulnerable to lightsabers and offers no protection against Mines.

In Star Wars: Battlefront: Renegade Squadron and Elite Squadron, it appears under the name Personal Shield Generator as a customization that can be equipped by the player for 25 credits. When activated, it will block all incoming damage, at the cost of restricting the user's movement.

Retrieved from "https://battlefront.fandom.com/wiki/Shield_Emitter?oldid=99749"
Community content is available under CC-BY-SA unless otherwise noted.