The Ship Auto Turret is a turret used for protecting a Frigate from enemy starfighters, bombers, and transports. It inflicts low but steady damage to enemy craft. This ship-mounted weapon is controlled by the Autoturret Mainframe, which if destroyed turns off all the Auto Turrets. A key strategy to win a game is to have Marines land in the enemy cruiser and destroy the Mainframe, allowing transports and bombers to get rid of ship modules and hardpoints. These weapons are also on Cruisers as Ship Repeating Blaster.

Destroying the mainframe is a hard objective, due to the fact the enemy respawns very quickly inside the room, and if the player and his/her team are pinned down outside, will lead to a counterattack and potential annhilation of the player and his/her team. A way to counter this is to have both transports land, that way most allies who die will respawn here, and mayhem will ensue throughout the ship, although player involvement is required in order to succeed in destroying the mainframe and other areas of the ship. The Auto Turrets will automatically repair themselves if destroyed, but not when damaged. This repair time leaves the ship and vulnerable hardpoints around it extremely vulnerable, as it takes at least a minute to repair, in which time the majority of the hardpoints will be destroyed by a well coordinated attack.

The turrets are fairly accurate, and if all, or at least most, of them are active, will present a serious threat to enemy space ships at long ranges, as the flak will affect the movement of fighters in the middle part of a map where they are completely exposed to fire that is heading in to cover them, and fire heading in to hit them. In the event the turrets have aquired targets who are attempting to destroy a hardpoint, it is most likely that the attackers will take heavy casulties if some manuvering is not taken.

Due to the AI behaviors while in the air, any squad not player controlled will take heavy fire and most ships will be shot down before any actual damage is taken.

The turrets also cover players who are flying their ship in for repairs, making them a viable option to fall back on if one is taking heavy fire.

Unfortunately, having "friendly fire" enabled leaves players and friendly AI vulnerable to taking damage from their own auto turrets. 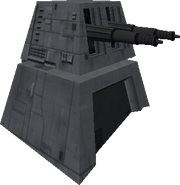 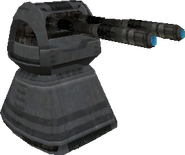 Separatist Auto Turret.
Add a photo to this gallery
Retrieved from "https://battlefront.fandom.com/wiki/Ship_Auto_Turret?oldid=87457"
Community content is available under CC-BY-SA unless otherwise noted.