This page is about the unit in DICE's Star Wars Battlefront. For the Rank 70 appearance, see Shock Trooper (Appearance).

Shock Troopers are Imperial NPC's in DICE's Star Wars Battlefront that can be encountered in Survival or Skirmish.

In Missions mode, they are the Empire's heavy gunners.

They are one of the most dangerous enemies present in the single-player missions, having more health than regular NPC soldiers and a more powerful weapon. They will appear once the player has achieved 26 points and will continue to spawn from there on. They will also spawn on the player's side if friendly AI is enabled after the enemy side gains more than 25 points.

A shock trooper wielding a DLT-19. This screenshot taken by Battlefront Captures.

A shock trooper on Tatooine.

Two shock troopers firing their weapons in a tusken raider camp on Tatooine. 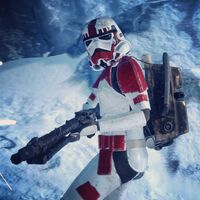