On Hoth, and Rhen Var, in SWBF1 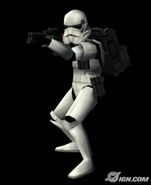