"A laser cannon provides a powerful attack for the Resistence when piloting the Ski Speeder. But keep closer to the ground for maximimum maneuverability."
— Website descriptionThe Ski Speeder is only available in Galactic Assault on Crait and can be used only by the Resistance. It requires 200 Battle Points to spawn in. Once the Ski Speeder is selected, it will spawn inside of a hangar and fly down to the planet's surface. It has considerably fast speed and can deal heavy damage to the AT-M6's.

Model of the V-4X-D Ski Speeder.

A Ski Speeder launches out of the abandoned Rebel base on Crait.

Promotional image of the Ski Speeder. 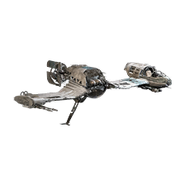 In-game icon for the Ski Speeder.
Community content is available under CC-BY-SA unless otherwise noted.
Advertisement