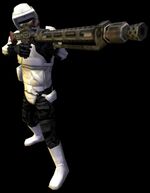 The sniper class specializes in long-ranged combat. Snipers have lower than average health, similar to special units such as Jet Troopers, but make up for this in speed and high damage. They are usually found in secluded areas, far from the front lines.

Although the equipment used by snipers in both games are similar, the specific sniper rifle and the actual soldiers themselves differed from faction to faction.

These are the type of sniper rifles used by each faction:

These were the soldiers, specific to each faction, that served as sniper units:

The two types of assassin droids in Star Wars: Battlefront.

A clone sharpshooter in BFII

A scout trooper sniper on Yavin 4.

A snow rebel marksman from the first game (left) and one from the second game (right).

A rebel marksman from the first game
Add a photo to this gallery
Retrieved from "https://battlefront.fandom.com/wiki/Sniper_(class)?oldid=87486"
Community content is available under CC-BY-SA unless otherwise noted.