It is the final grenade added to the game, and overall final Star Card added.

The Sonic Imploder is very similar to the Flash Grenade and the Impact Grenade. It emits a blast that blinds enemies for a much longer time than the Flash Grenade, and if it is very close to an enemy it can kill. The Hutt Contracts to unlock the grenade are "Grenadier I" and "Grenadier II." The requirements for the first is flash 25 players and get 15 kills with the Impact Grenade. The latter requirements are get 30 kills as Jyn Erso and get 5 kills with the Sonic Imploder.

If you are having trouble getting kills with the Impact Grenade or Sonic Imploder then it is suggested to equip the Shock Grenade. The Shock Grenade will shock an enemy if they are in range of the explosion and will not be able to move and then you will be able to get your kills quicker and easier. 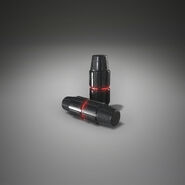 Add a photo to this gallery
Retrieved from "https://battlefront.fandom.com/wiki/Sonic_Imploder?oldid=65263"
Community content is available under CC-BY-SA unless otherwise noted.