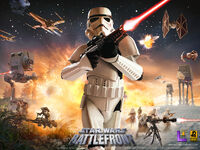 Star Wars: Battlefront is a first-person shooter/third-person shooter(interchangeable) video game based around battles featured in the Star Wars films. It was developed by Pandemic Studios and LucasArts, and released on September 21, 2004 for Xbox, PlayStation 2, and Microsoft Windows, the same day as the release of the Star Wars Trilogy DVD set. Aspyr released a Mac port in July 2005. People can either play Battlefront online with up to 32 players on PC, Mac and Xbox, and 16 players on PS2, or offline with up to 2 players. The Xbox version is backwards compatible with the Xbox 360. See Star Wars: Battlefront for more information. After November 7,2012 GameSpy no longer hosts the game for online multiplaying. The only way to play online is by downloading Tunngle or GameRanger which is used as the server. 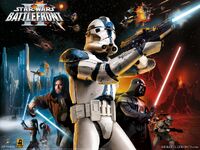 Star Wars: Battlefront II is a first-person shooter/third-person shooter (interchangeable) video game developed by Pandemic Studios and LucasArts, and released in North America on November 1, 2005, for Microsoft Windows, Xbox, PlayStation Portable, and the PS2. There are several differences between Battlefront II and the original Star Wars: Battlefront, such as playable Jedi characters, new unit classes, space battles, and story campaigns, as well as Episode III content. The release date coincided with the release of Revenge of the Sith on DVD. 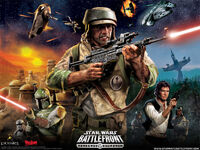 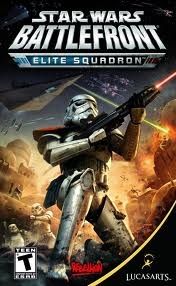 Further information revealed by numerous Battlefront info youtube channels, including SirTuggie and BattlefrontUpdates, says that DICE want to avoid making the game Battlefield with Star Wars skins and while they want it to be their game, to still be "Battlefront" in both name and gameplay. However, changes will no doubt be made, but at least DICE are apparently being very cautious to make a quality shooter that is their own game but still recognizable as a Battlefront game.

Because LucasArts had never mentioned nor commented about working on Battlefront III, Free Radical Design initially developed the game. However, due to other video game projects they were developing and the loss of a Free Radical employee, they could not support Battlefront III.

In 2009, rumors about Rebellion Develepments were in the air about how they were developing Battlefront III. However, Elite Squadron was released that year. Despite that, they showed a small bit of Battlefront III gameplay on GameSpy, which led to speculation that the game would be announced at E3 2010; however to many players' dismay, the game was not announced.

According to our YouTube sponsor, Tuggiegamesreview (now SirTuggie), the likely candidate will be Spark Unlimited. According to their website as an "Unannounced Game" they said:

Spark Unlimited turned out to be developing Lost Planet 3.

In 2013, E3 confirmed that Battlefront 3 (Named simply as Star Wars: Battlefront) is indeed in the process of being created by DICE, the developer of the famous Battlefield series.

200px
A short teaser trailer was shown on the setting of Hoth and wreckage in the distance. From the audible breathing, we can infer that the player is injured. Laser bolts flew just barely off the frame and the perspective turns upward to see a snowspeeder spiraling down from the sky. The perspective follows the craft until it crashes off the frame to the left, where it turns again and an AT-AT's foot slams on the ground.

Retrieved from "https://battlefront.fandom.com/wiki/Star_Wars:_Battlefront_Series?oldid=41542"
Community content is available under CC-BY-SA unless otherwise noted.