On January the eighteenth, 2012; the United States of America proposed a bill named "Stop Online Piracy Act" or "SOPA" for short and "Protect IP Act" and it was also shortened to "PIPA." These bills are threatening to Wikia due to these reasons posted on IP Law Wiki in the section called "Take Action" [1]:

Battlefront Wiki, as a part of Wikia, agreed with this fully and create the decision to blackout along with millions of other sites.

For there is not a proper way, Anakin Skyobiliviator uploaded this on the main page to raise the awareness:

Due to the United States Congress, no edits will be allowed as our site is on black out on January 18 2011 to raise the senses of the people of this involuntary action.

Upon the next day of January the nineteenth of 2012, due to a few misunderstanding of sign, Anakin inserted a message on the Community Corner that said the following:

Due to our protest against SOPA and PIPA, everyone please refrain from editing from January 18 to January 20. Talk page edits are allowed but article fixing must be held until the assigned date. Thank you for your cooperation.

And to prove the point, he states that this blackout will last four days from January 18 to twentieth. He also uploaded an image that will replace the main page's normal format during the blackout. This is the image: 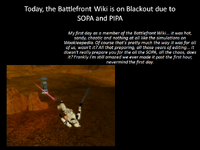 The quote was taken from the 501st Journal of the first mission and revised to fit the situation.

Retrieved from "https://battlefront.fandom.com/wiki/Star_Wars_Battlefront_Wiki:Historical_Moments/SOPA_PIPA_Blackout?oldid=64498"
Community content is available under CC-BY-SA unless otherwise noted.