All players start out with helmeted Stormtrooper skins for free. They are the only infantry for the Empire that change their armor on different planets ,for example the storm trooper models are based off the original storm trooper design found in Star Wars Episode 6 "Return of the Jedi" The the differences and mostly notable in the helmet as they have a more curved and rounded voice Diaphragm compared to the more pointy one as seen on Todays Storm Troopers . The game originally had helmetless stormtroopers, but this option was removed due to fan complaint and the skins were replaced by the Death Star Trooper and Imperial Officer instead.

In Missions mode, they are the basic enemy foot soldiers and do not pose much of a threat in any way. Being more or less cannon fodder, they are rather weak individually and are not particularly hard to kill in most situations.

That being said, stormtroopers are not to be underestimated. Their sheer superiority more than makes up for each individuals' rather lackluster performance and they can easily overwhelm the player if caution is not taken, especially in Survival. Realistically Storm troopers are tough well trained as quite loyal individuals far more superior then their Rebel infantry counterparts, as the word elite fits perfectly with the StormTrooper Corps.

They also appear in Skirmish on Walker Assault, where they move and act largely in the same as they do in Missions with some performance improvement at higher difficulties.

Stormtroopers wear different armor on different planets and are the only Imperial units to do so:

On Endor, Bespin and the Death Star

On Hoth, known as Snowtroopers

On Sullust, known as Magma Troopers

On Tatooine and Jakku, known as Sandtroopers

On Scarif, known as Shoretroopers

Stormtroopers on Endor at night.

A magmatrooper firing a pulse cannon.

Stormtroopers firing their weapons on Endor at night.

A specialist and heavy stormtrooper in a trailer for Star Wars Battlefront II. 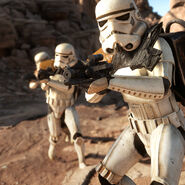 A sandtrooper gets hit by an explosion on Tatooine.

The YouTube thumbnail for a trailer for Star Wars Battlefront, featuring a sandtrooper. 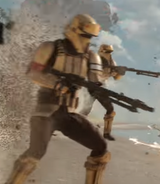 A shoretrooper on the character customization screen for Star Wars Battlefront

Images of a shoretrooper captain.

Stormtroopers return in DICE's Star Wars Battlefront II as the Assault class unit for the Galactic Empire. Like all Assault soldiers, their primary abilities are the Thermal Detonator, Vanguard, and Scan Dart, though these can be swapped out with the use of Ability Cards. Their standard issue blaster is the E-11 blaster rifle, but, like all Assault units, they can also use the A280 blaster rifle, the CR-2 blaster pistol, the EL-16HFE blaster rifle, and the E-11D blaster rifle.