"Covered with smoke, ash and flowing lava [sic] Sullust is a hot and harsh environment. The planet is the home world of the Sullustans."
— Star Wars Battlefront website

Sullust is a volcanic planet that has molten magma and sulfur all over its surface. It has beautiful lakes and ponds of turquoise water that dot the surface of the mostly black planet.

The following are maps set on Sullust and the game modes they are featured in:

Imperial Star Destroyers in the atmosphere of Sullust.

Imperial TIE Fighters flying above the surface of Sullust.

An Imperial hanger on Sullust.

Nien Nunb and two Rebel soldiers fighting in a factory on Sullust.

Sullust in the main Image 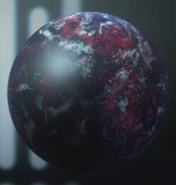