SoroSuub Centroplex is a multiplayer map in Star Wars Battlefront. It is playable in Walker Assault, Supremacy, Fighter Squadron, Turning Point, and Skirmish. This map is an Imperial base and factory that most likely produced TIE fighters. This map could be based on a series of events in Battlefront: Twilight Company.

Defining features of the map include rocky terrain and lava rivers. When played on Walker Assault, after a certain point, the two AT-ATs split up onto different paths. This map also includes a massive hangar bay with TIE fighter docks. There are several camps that can be used for supporting fire.

Rebels do have access to A-Wings in this mode. Due to the open areas on the map, it is very easy for someone to get killed by a starfighter while on the ground. It is recommended that good AT-ST pilots need to focus on eliminating Alliance starfighters before moving onto objectives to intercept infantry and turbolasers. 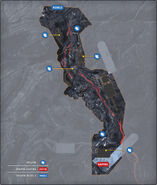 SoroSuub Centroplex in Walker Assault.
Add a photo to this gallery

Fighter Squadron on this map is similar to Outpost Beta, Jundland, and Graveyard of Giants, but it is a bit more challenging. What makes it more challenging are the large turbo lasers that reach high into the sky. The turbolasers cannot be controlled by any player, and is in complete control by the A.I, but their accuracy is low. It is very easy for starfighters to go in low to swoop under platforms and around laser towers to evade enemy fire. 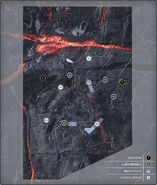 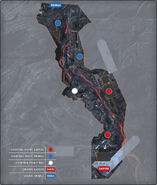 SoroSuub centroplex in Supremacy
Add a photo to this gallery

Concept image of a stormtrooper and machinery. (Battlefront 2015)

Concept image of a stormtrooper and storage container. (Battlefront 2015)
Add a photo to this gallery
Retrieved from "https://battlefront.fandom.com/wiki/Sullust:_SoroSuub_Centroplex?oldid=92214"
Community content is available under CC-BY-SA unless otherwise noted.