The T-47 Airspeeder is a small, wedge-shaped craft with two forward-facing laser cannons. In its rear arc is a harpoon gun fitted with a heavy-duty tow cable. The Airspeeder is a two man vessel, with the pilot operating the aircraft and its forward facing guns with the (non-playable, as well as non-visible.) gunner operating its harpoon. This vehicle can be piloted in Supremacy, Walker Assault and Turning Point, as well as the "Invasion" training mission. The snowspeeders are collectively under the call sign Blue Squadron.

Even at full throttle, the Airspeeder does not have the speed or agility of its fighter brethren. This combined with it's lack of missiles and it's inability to use a shield leaves it a sitting duck for any Imperial fighters remaining. Although it can lock onto enemy fighters, the chances of getting a hit are very small. Instead, the Airspeeder is better suited for air-to-ground combat, performing strafing runs on enemies down below while using the Speed Boost and Sensor Jammer to avoid pursuing enemy fighters.

In Walker Assault, this craft gains another purpose. Obtainable only at the last objective, the Airspeeder can be used to instantly take down an AT-AT walker by flying next to it and firing its tow cable. The player then has to complete a minigame to successfully take down the walker.

Using the Sensor Jammer during the mini game is recommended, as it can help lower the chances of the player failing since Smart Rockets and Ion Torpedos can cause not only damage, but cause the airspeeder icon to be out of the area for success.

"The T-47 airspeeder is a small, wedge-shaped craft with two forward-facing laser cannons. In its rear arc is a harpoon gun fitted with a heavy-duty tow cable."
— In-game description

The T-47 Airspeeder returns in Star Wars Battlefront II for the Rebel Alliance, with some changes made to its abilities and mechanics. Unlike the last game, the Airspeeder is only available on Hoth: Outpost Delta.

The T-47 Airspeeder is one of the most capable speeders in Battlefront II. It handles more like a starfighter than in the previous game and is able to hold its own against Imperial starfighters. Its main purpose is to act as air support for ground troops, such as strafing enemy ground targets and attacking the AT-AT when it becomes vulnerable.

Once an AT-AT has been damaged to the point where it only has 1/3 of its health left, the Airspeeder can start a tow cable takedown by flying near the Walker's legs and into the golden rings that appear. The Walker does not have to be exposed in order to initiate the takedown.

Unlike the last game, the process is no longer done automatically, the player must manually complete three laps around the Walker to take it down, and is awarded score once the Walker is taken down. Destroying the AT-AT directly impacts the next phase, as the destroyed Walker will not be present to destroy the Hangar doors and forces the Imperials to attack the Hangar in question from within the base. 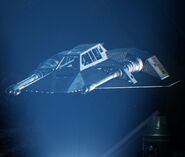 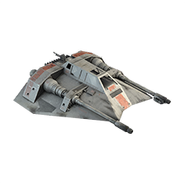