"Red Six standing by."
— A possible line when spawning in as an X-Wing

The X-Wing is equipped with four blaster cannons, proton torpedo launchers, and a shield. The X-Wing is the Alliance counterpart to the Imperial TIE Fighter.

The Proton Torpedo can be used to give enemy starfighters a large portion of damage, as well with taking out their shield. The X-Wing however must lock onto the enemy starfighter before it can fire, or else it will go off course. It can also be avoided if the enemy uses a dodge move, but only when the timer is gone.

"As the backbone starfighter of the Rebel fleet, the T-65B X-wing is an all-purpose strike craft that can fulfill many roles."
— In-game description

The T-65B X-Wing returns in DICE's Star Wars Battlefront II as a Fighter unit. It is playable on Starfighter Assault, and certain Galactic Assault maps.

"The X-wing can do it all: engage interceptors, take down TIE fighters, interdict bombers, and assault capital ships."
— Website description

The X-Wing is more than capable of fulfilling multiple roles, such as dogfighting with other starfighters, attacking objectives, and conducting ground attacks against infantry.

The Astromech Repair ability regenerates any lost health to the X-Wing, and can be used in order to increase the survivability of the ship in cases of prolonged pursuits.

With the Quad Laser Cannon ability, the X-Wing combines the firepower of all four of its cannons in order to unleash high damage to any target. This ability can also be used to deal heavy damage to the AT-AT on Hoth when exposed, or to obliterate ground infantry and vehicles, although the ship's weapons will heat up significantly faster.

The Proton Torpedo can lock onto enemy starfighters and be used in a fire and forget manner, and can also be used to attack objectives, infantry, and enemy AT-STs. A well-placed torpedo can deal tremendous damage to any enemy, including Heroes and Armor. The Proton Torpedo can be dumbfired by double-tapping the ability, while tapping it once and keeping sight of a target allows it to lock on.

An image of an X-Wing on Tatooine by Cinematic Captures.

A T-65B X-Wing flying near an asteroid belt.

A T-65B X-Wing in the midst of a match of Fighter Squadron.

Promotional image of the X-Wing. 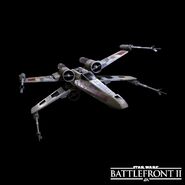 Another promotional image of a T-65B X-Wing for Star Wars Battlefront II. 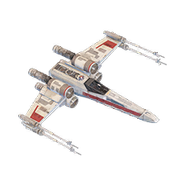 In-game icon for the X-Wing in Star Wars Battlefront II.