"Like its predecessor, the T-70 X-wing is a highly versatile starfighter which balances speed, maneuverability, and firepower."
— In-game description

The T-70 X-wing is a class of starfighter in DICE's Star Wars Battlefront II. It, similar to the T-65 X-wing models used by the Rebel Alliance, is the main starfighter of the Resistance. The T-70 serves as the Fighter for the Resistance, and is distinguishable from the T-65 by the four engines, which have changed from the T-65's circular appearance to the T-70's crescent appearance.

The T-70 X-Wing is more than capable of fulfilling multiple roles, such as dogfighting with other starfighters, attacking objectives, and conducting ground attacks against infantry.

The Astromech Repair ability regenerates any lost health to the T-70 X-Wing, and can be used in order to increase the survivability of the ship in cases of prolonged pursuits.

With the Quad Laser Cannon ability, the T-70 X-Wing combines the firepower of all four of its cannons in order to unleash high damage to any target. This ability can also be used to enemy Hero Starfighters, or to obliterate ground infantry and vehicles.

The Proton Torpedo can lock onto enemy starfighters and be used in a fire and forget manner, and can also be used to attack objectives or infantry. A well-placed torpedo can deal tremendous damage to any enemy, including Heroes and Armor. The Proton Torpedo can be dumbfired by double-tapping the ability, while tapping it once and keeping sight of a target allows it to lock on. 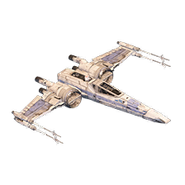 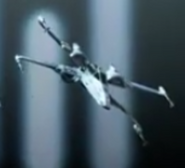