"Flown by the elite pilots of the Imperial Navy, the TIE interceptor combines high speed and four laser cannons to hunt down Rebel starfighters."
— In-game description

"The TIE Interceptor rushes ahead and clears paths for allies, takes down bombers, and ties up enemy fighters."
— Website description

The TIE Interceptor excels at hunting down and engaging other starfighters. As an interceptor, it makes use of its impressive speed and maneuverability in order to close in on its enemies and to shake off pursuers.

The Afterburner ability grants a speed boost to the TIE Interceptor, and can be used in order to break missile locks and to shake pursuers.

The Concussion Missile ability allows the TIE Interceptor to briefly disorient enemy starfighters it hits, along with being able to blind soldiers on the ground that are near the explosion. While not as powerful as torpedoes from the Fighter or Bomber, the Concussion Missile is still capable of finishing off weakened targets.

Promotional image of the TIE Interceptor. 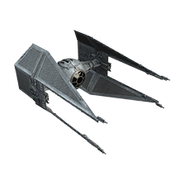 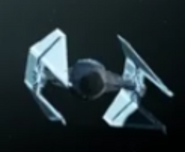