"An upgrade to the TIE/LN, the First Order TIE adds a much-needed deflector shield to the design without compromising on the original’s combination of speed and agility."
— In-game description

The TIE/fo, also referred to as the First Order TIE Fighter, is a class of starfighter in DICE's Star Wars Battlefront II.

The TIE/fo Fighter is the Fighter class for the First Order and the counterpart to the T-70 X-Wing. It is visually very similar to the Imperial TIE/ln Fighter from which it is based. It was first confirmed to appear in the game in the game's official reveal trailer, where the fighter appeared on the First Order superweapon Starkiller Base.

The TIE/fo Fighter is more than capable of fulfilling multiple roles, such as dogfighting with other starfighters, attacking objectives, and conducting ground attacks against infantry.

The Afterburner ability grants a speed boost to the TIE/fo Fighter, and can be used in order to break missile locks and to shake pursuers.

With the Laser Barrage ability, the TIE/fo Fighter can unleash a devastating burst of high damage against anything unfortunate enough to be hit by all the blasts. This ability can also be used to damage objectives, or to harass enemy Hero Starfighters.

While the TIE/fo has "shielding", its total health is functionally the same as the shieldless TIE/ln Fighter and serves only as a visual piece.

The TIE/fo Fighter as seen in the reveal trailer for Battlefront II. 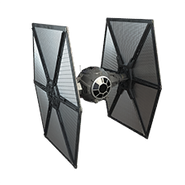 In-game icon for the TIE/fo Fighter
Community content is available under CC-BY-SA unless otherwise noted.
Advertisement